Syncing is the process of sending changes you have made on your device to the cloud server and receiving changes made on other devices. This ensures all the devices on your ranch have the latest information. It also ensures your data is safe, even if you were to lose all your devices, since you can get a new device, install Herdly, and log in to get all your data back from the cloud server.

Most of the time you will not need to worry about syncing as Herdly does this automatically whenever there is an internet connection. However, if something has gone wrong and you need more information about syncing, please keep reading.

Although Herdly is built to allow you to work off grid with all your data available, it is still best to sync as soon as possible. The reason for this is twofold:

In order to get your changes up to the cloud server as soon as possible, Herdly on a computer will try to sync within 5 seconds of a change being made. Herdly on a mobile device will sync within 10 seconds of a change. On both platforms Herdly will also attempt a sync every 10-30 minutes in order to pull down any new changes made by other devices. Herdly also syncs each time you launch the app.

Please be aware that syncing cannot happen on the computer if Herdly is not running. It can be in the background, however. We recommend leaving Herdly running all the time so it can stay synced.

If you know another device has made a change and you need it right away, you can manually sync. On the computer go to File > Sync or type Command-S (Mac) or Control-S (Windows) from anywhere in Herdly. On a mobile device, go to Settings > Sync and tap the Perform Sync button.

You can tell when Herdly is syncing. On the computer a small window in the bottom right of the screen will appear during this time with a few details about the sync. 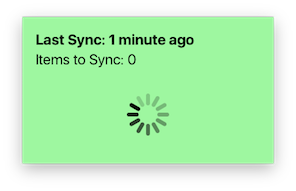 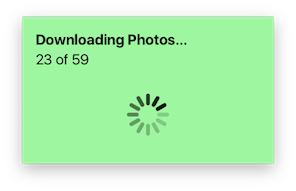 It will disappear when the sync has finished unless there was an error. In that case, the window will turn red to indicate that a sync failed. 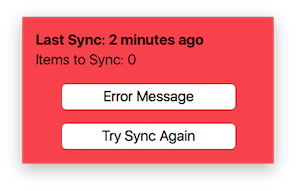 Click the Error Message button to learn what caused the sync to fail. Often it will simply be that the internet isn't working and you can try the sync again later.

On a mobile device, a sync icon will be shown on the Settings tab bar icon. This icon will be a different color, depending on what is happening:

As mentioned above, the most common reason to see a yellow or red badge is because you are not connected to the internet. However, other issues can also happen. You can always see the latest sync information, including a list of errors by going to Settings > Sync.

Most of the time a normal sync is all that is needed. A normal sync simply sends any changes you've made to the cloud server and retrieves any changes made on other devices since your last sync.

A full sync is different and shouldn't need to happen very often. It sends your changes to the cloud server, but then replaces all of the data on your device with data from the cloud server. This is the same as starting with a new installation of Herdly. Herdly will automatically do a full sync during some upgrades. You can also manually perform a full sync on the computer by opening the Tech Support Utilities window (File > Tech Support Utilities), going to the Syncing section, and clicking the Full Sync button. On a mobile device, go to Settings > About Herdly > Perform Full Sync. This should normally only be done under the direction of support staff to fix an issue. It can also take some time, especially if you have a lot of data.

When a photo is added in Herdly, it will be synced to the cloud server as soon as possible. Computers will receive all new photos from other devices during the next sync and will store all photos on the computer. Due to space limitations, mobile devices only download a photo it doesn't already have when it is needed. Because of this, it is possible that you won't be able to see some pictures when you don't have an internet connection while on a mobile device.

While Herdly will work fine without an internet connection, we strongly encourage you finding a way to allow a sync at least once a day, especially if you have been making changes on your device. Also, there is a limit to how long you can go without syncing before your changes may be lost. Currently that limit is 30 days. This is a safety measure since syncing data that is more than a few weeks old could produce undesirable and unexpected results.

What happens if they both edit the same field? Herdly will keep the change of the last person to make the change, regardless of when or in what order they sync.

What happens if they both edit the same field at exactly the same time? Well, Herdly just flips a coin to see who wins!